Participation on Trial. Not the end. A new spirit of openness?

A week after Participation on Trial at Union Chapel, I think it is worth reflecting a little upon the event as a format that could offer interesting potentialities in opening up arts and cultural debate. 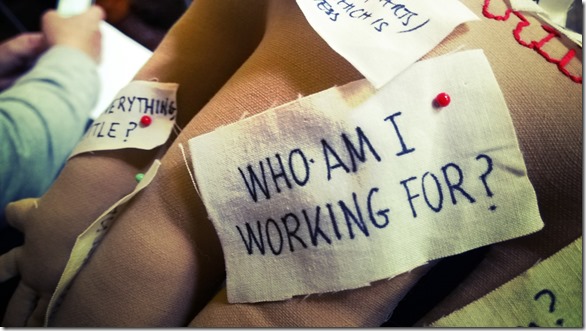 Participation in the arts faced a Dadaesque mock-trial in a Nonconformist chapel in London last Friday, 1st May, on International Workers’ Day. The hearing was presided over by a real judge. There were twelve jurors, including a banker in a dapper suit. There were ten witnesses – six for the prosecution (including a last minute turncoat), five for the defence. Defence and prosecution councils. A typewriter tapping, pedantic clerk of court. A cheeky tea lady. And a non-stop knitter. The five defendants – each a seen-better-days female mannequin upper half, resplendent in an array of fancy headwear and over-the-top make up – tottered in front of the judge wearing their allegiances on placards round their necks. The ‘Artful’ Art Schools. The ‘Machiavellian’ Academics. The ‘Cunning’ Cultural Institutions. The ‘Foxy’ Artists. The ‘Canny’ Funders. All stood accused of ‘Lies, Damned Lies and Social Return on Investment’. Chrissie Tiller and her team at the Participatory Arts Lab, Goldsmiths, planned this event as a celebration of the now discontinued MA in Participatory and Community Arts. The result was extraordinarily refreshing. Open. Unusual. Sharply contrasting with the art community’s new de rigueur – self-censoring, tight-lips, sycophancy, uniformity, compliance.

As a prosecution witness, my role was, together with five others – Frances Williams, Sylvan Baker, David Slater, Jenny Sealey and, the turncoat, Alison Rooke – to attempt to convince the court of the defendants’ guilt. For different reasons, we each felt aggrieved by the hijacking of notions of participation in the arts for a whole host of instrumentalist agendas that did nothing to encourage community or equality. We also held that participatory arts lacked any depth or real engagement – a risk-free field where ‘professionalism’ and specialised box-ticking jargon had replaced people-first intuition and the uncertainty of creating art together. Our position was one of (almost) complete disdain for smothering bureaucracy, top-down administration, impact measurement, cost-benefit analyses, and many other impositions that had turned participation into a watchword for state-sponsored compliance. The foot soldiers were revolting. We’d had enough.

Meanwhile, the defence witnesses (comprising David Jubb, Sophie Hope, Deborah Curtis, Julia Farrington and Andrew Barnett) all pretty much played the party line – Whatever You Want – ubiquitous riffs that everyone likes to dance to. Everyone but us, the prosecution wondered? We all (unfortunately, perhaps) know the lyrics of the Status Quo – feel good, harmless, catchy. No. GUILTY. All five defendants were found guilty. Complicit in the wilful deception of participants and the arts world alike. The verdict was accompanied by the words ‘But who cares?’ Who cares? Certainly the Participation on Trial participants, but beyond us? Will anyone listen? Will anyone think twice about trotting out ‘arts for all’, ‘participation for everyone’, or any of those other shallow vicissitudes? Probably not. Not yet, in any case.

And yet, for me, the trial held promise. Surreal? Yes. Irreverent? Yes. Angry? Sometimes. Controversial? For some. Performative? Beautifully. There was a curiously democratic edge. It felt uncomfortable. Exciting. Why? Perhaps because we could speak openly. Differences of opinion. Great! Cross-examination was challenging. The feedback honest and immediate. The arts need this. Artists need this. The Arts and Cultural Industries elite would probably hate it. Why? I challenges their hegemonic grip – their Newspeak – their power – their control. Participation on Trial could be expanded; the format could be more or less specific; the trial could tour?  Mocking AND/ NOR deadly serious events like this might offer potential to really bring the many simmering issues in arts and culture and politics into an open space where dissensus is okay – perhaps even good?  Let’s move away from dry lectures and state approved consensus speaking.  We all should feel free to speak our minds.  No more self-censorship.  No fear of penalties.

So, for me, Participation on Trial excelled on many unusual levels, not least that pernicious forms of participation in the arts were found guilty, but also because it provided a much needed blend of serious debate and deadly serious hilarity.

One thought on “Participation on Trial. Not the end. A new spirit of openness?”