Here we go round the mulberry bush

A repetitive, cyclical dance around a plant upon which mulberries don’t really grow whilst mimicking of everyday actions and chanting ‘This is the way…’  and a response to a blog post on the #culturalvalue initiative website by Daniel Allington entitled Intrinsically cultural value: a sociological perspective. 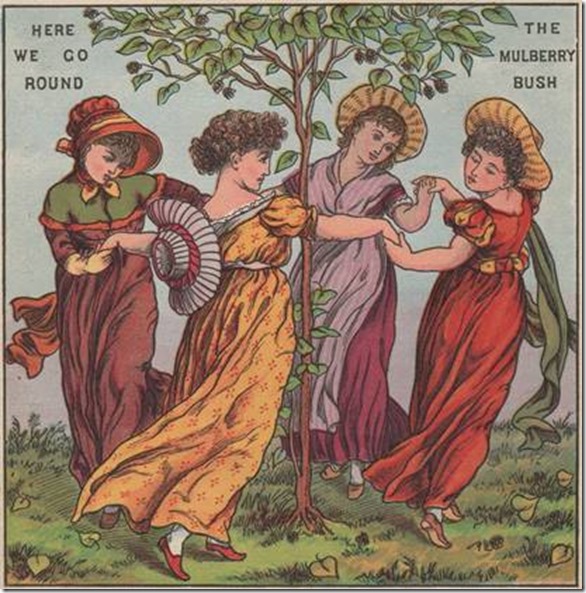 The art business, a trade in things that have no price, belongs to the class of practices in which the logic of the pre-capitalist economy lives on… These practices, functioning as practical negations, can only work by pretending not to be doing what they are doing. Defying ordinary logic, they lend themselves to two opposed readings, both equally false, which each undo their essential duality and duplicity by reducing them either to the disavowal or to what is disavowed – to disinterestedness or self-interest.[1]

Who said Bourdieu’s cultural capital and network theory don’t mix? Daniel Allington explains in this post that he finds this unlikely coupling ‘a useful way of studying cultural value from a perspective informed by Bourdieu’.[2] This is not all, he begins by stating that ‘Art for art’s sake… means understanding the value of culture as intrinsically cultural.’[3] Bourdieu, art for art’s sake, and many other words and assumptions in Allington’s essay all sit uneasily with my perspectives of arts and culture (based as they are upon critical theory and my own practise as part of the arts ‘field’), as indeed does the rather insidious term ‘cultural value’.

For me, the antiquated and elitist concept of ‘art for art’s sake’ is circular – self-referential – intrinsic. So too, surely, is the conceptualisation of ‘the value of culture’ as ‘intrinsically cultural’. What is the value of culture? Essentially cultural. What are intrinsically cultural beliefs? Cultural value. Here we go round… For Allington, the answer to this conundrum may lie in Bourdieu’s suggestion that ‘cultural value is a form of belief’; a belief in ‘magical’ and fetishised objects of art and literature that believers consider magical.[4] Citing The Emperor’s New Clothes, ‘It isn’t’, according to Allington, ‘that there are people who have laughingly duped the rest of society into believing in something they know very well not to be real.’[5] Rather, it is about ‘symbolic capital’ in which ‘[t]he making of art for art’s sake is… not about satisfying an audience of consumers, but about earning the esteem of fellow producers, who are also competitors for one another’s esteem.’[6] Allington attempts to legitimise this statement by referencing Bourdieu’s The production of belief: contribution to an economy of symbolic goods, selecting the following quote: ‘“the conviction that good and bad painting exist” is both “the stakes and the motor without which [the field of painting] could not function’”.[7]

So what’s the problem here? Well, it would seem to me and my somewhat limited knowledge of Bourdieu – limited because I do not find it particularly useful or important from an art historical perspective – that Allington has misread Bourdieu’s intentions. The quote at the beginning of this piece is from the first paragraph of The production of belief: contribution to an economy of symbolic goods. It clearly illustrates Bourdieu’s disdain for the ‘arts business’. Bourdieu’s entire essay is about the complicit nature of all participants in the field of cultural production who, by refusing commercialism and even claiming to be ‘anti-economic’, actually profit via a ‘disinterested’ game of smoke and mirrors that ultimately creates ‘symbolic capital.’[8] But symbolic capital, as Bourdieu explains:

[I]s to be understood as economic or political capital that is disavowed, mis-recognized and thereby recognized, hence legitimate, a ’credit’ which, under certain conditions, and always in the long run, guarantees ’economic’ profits.[9]

Indeed, Bourdieu goes on to explain that this ‘circle of belief’ ensures that ‘only those who can come to terms with the “economic” constraints inscribed in this bad-faith economy can reap the full “economic” profits of their symbolic capital.’[10] So, this is like The Emperor’s New Clothes. The believers know the ‘magic’ isn’t real because they all dance the bad-faith dance, round and round. Producers, curators, critics, sellers, buyers, even (sometimes) the viewing public, all play the art game – they all know their place, their role in a field where naivety has no place; an arts economy where:

In and through the games of distinction, these winks and nudges, silent, hidden references to other artists, past or present, confirm a complicity which excludes the layman, who is always bound to miss what is essential, namely the inter-relations and interactions of which the work is only the silent trace.[11]

So, rather than ‘conceptualising’ intrinsic cultural value as a form of circulated belief as Allington does in his essay,[12] one could view the production of visual art (taking Allington’s example) as the making of an object of personal choice which is then selected by an institution/ commercial gallery and marketed to audiences by a variety of means (including critics). Only then are values (cultural, economic, social) assigned to it which are then reassigned to the work over and over as it ages and is perceived anew by different audiences.

So my argument with Allington is that he has misread Bourdieu in his attempt to investigate intrinsic cultural value. He has not accounted for the bad faith inherent in Bourdieu’s critical analysis of the art world game – a position I do not hold to personally. Bourdieu made his position very clear in 1972 when he explained:

The denial of economic interest finds its favourite refuge in the domain of art and culture, the site of [a] pure [form of] consumption, of money, of course, but also of time convertible into money. The world of art, a sacred island systematically and ostentatiously opposed to the profane world of production, a sanctuary for gratuitous, disinterested activity in a universe given over to money and self-interest, offers, like theology in a past epoch, an imaginary anthropology obtained by the denial of all the negations really brought about by the economy.[13]

I would recommend interested readers take a look at Brigit Fowler’s essay Pierre Bourdieu’s sociological theory of culture (Variant, 1999) for more on this subject.[14]

I could expand but I’ve still exceeded 800 words (975) – the limit imposed by the #culturalvalue initiative debating rules.  But I like to break rules.

[12] Daniel Allington, Op. Cit., describes this process as: ‘the value of (say) a visual artist’s work (essentially produced through interactions among cultural producers) flows out into the wider social world through the disseminating agency of (say) a retrospective exhibition in a major public gallery, which plays a direct role in reproducing belief in that value among members of the public who attend the exhibition, as well as an indirect role in reproducing belief among those who hear about it from acquaintances and/or read about it in (say) a newspaper critic’s review (and which in turn impacts back upon the field by cementing the artist’s reputation , though this closure of the feedback loop is left out of the diagram for simplicity’s sake).’

One thought on “Here we go round the mulberry bush”